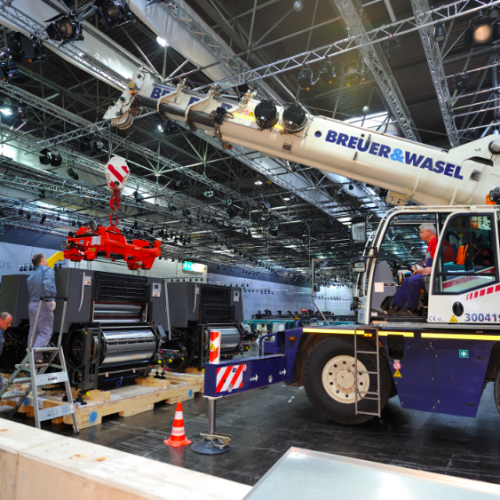 The company is counting down the days to drupa 2012, where it will build five Hei-Tech print shops, representing successful business models, using 2 000 metric tons of material. The company is once again the largest exhibitor at drupa this year.

Heidelberg is presenting around 60 innovations under the banner Discover HEI at drupa, which is being held every four years. The company is exhibiting its complete portfolio of solutions for commercial and packaging printing at its booth, which covers around 6300sqm roughly equivalent to a soccer field. This portfolio ranges from prepress to post-press and includes the full offering for digital printing. Building such complete and integrated print shops would normally take longer than half a year, said Uwe Galm, the technical manager for the drupa presentation at Heidelberg. He doesnt have that much time on this occasion though – exactly 27 days and nights will have to do.

Just before Easter, Heidelberg gained entry to Hall 1 and over the holidays large parts of the infrastructure were installed such as lighting, sound, and cabling in the floor and along the ceiling. The Tuesday after Easter saw assembly of the machines get underway. Two weeks later, on April 23, Heidelberg aims to begin testing all the assembled machines to ensure they are fully functional. Everything needs to be ready on the afternoon of May 2, barring a few smaller jobs.

This is a mammoth task logistically for Galm and his team, involving almost 200 service engineers, booth builders, electricians, and lighting and audio engineers. In the first few days, they will be working in two shifts around the clock and later in just one. Around 2000 metric tons of material will need to be brought to the right locations at the booth – but first of all it has to be transported to Düsseldorf. The weight equates to around 1500 mid-range cars or 100 truck loads in the 40 metric ton class and everything will need to reach the exhibition center in a precise sequence. The heaviest individual component, the Dymatrix 106 die cutter, is 10m (33 feet) long, 2.70 meters (9 feet) wide, 3m (10 feet) high, and weighs 33 metric tons alone. In all, 12 presses and 11 post-press machines will be installed at the Heidelberg booth.

The volume of materials that Galm has to provide for power supplies, communications, and setting up a data network is also impressive. His must do list includes 3.2 kilometers (2 miles) of fibre optic cables, 12 kilometers (7.5 miles) of 230V power lines, 3.5 kilometres (2 miles) of telephone lines, 8.5 kilometres (5 miles) of cables, 6 kilometres (4 miles) of data cables, and a whole lot more besides. To show the machines in the right light, he also needs 1150 conventional and 400 LED spotlights with a total output of 1.2 megawatts, while 130 loudspeakers will ensure the correct acoustics.

Running the booth itself will also be a major organisational and logistical challenge. Around 1,200 employees at Heidelberg are involved in preparing for and staging drupa. They and some 130 hostesses have been given intensive training for several weeks to ensure everything is just right and to make the visitors, who are expected to number around 360,000, feel completely at home.

Entire trade show booth is to be carbon-offset
The company doesnt just attach importance to a perfect trade show presentation. It is also committed to ensuring it is as eco-friendly and sustainable as possible. Attention was focused on environmentally-friendly processes and reusable/recyclable materials as early as the planning and tendering phase. The entire trade show presentation will be climate-neutral, which means CO2 emissions for all processes and materials related to the trade show will be offset. This applies to all areas ranging from project management and logistics operations – including assembling and dismantling machinery – to operating the machinery, travel to and from the event, and accommodation for staff. Additional parameters involved in the CO2 calculations for the booth include consumables used such as paper and inks and power supplies for the technology and equipment at the show. The monetary equivalent of the CO2 emissions will go toward a reforestation project in Togo.

At drupa 2012, Heidelberg will also be underlining its pioneering role in green printing itself. The company is the first manufacturer worldwide to offer the option of carbon-offset presses ex works. Virtually all sheetfed offset presses featured at drupa will also contain an energy meter that measures the power consumption per 1000 sheets, thus making it easier for customers to save electricity.

Figure 1-2: The countdown to drupa 2012 has started: At Easter Heidelberg set out to work on the assembly of its booth in hall 1. With around 60 innovations the company is presenting itself under the banner Discover HEI at drupa, which is being held every four years.

Understanding The Importance Of Workflow In Printing