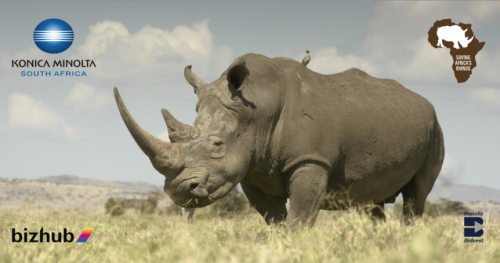 Konica Minolta South Africa (KMSA) continues to support World Wide Fund for Nature (WWF) in keeping Africa’s iconic rhino alive and have handed over the company’s Q4 2012/ 2013 contribution WWFs rhino conservation work, which serves as a continued commitment to the rhino’s cause for another year.   This latest cheque for R364, 000 brings the total donated for the past two years to R2,412,500.

Donation funds from KMSA are used to help in the running and further development of the Africa-wide rhino horn DNA database (RhODIS) by the University of Pretoria’s Veterinary Genetics Laboratory.

Griffith also mentioned that KMSA is serious about assisting in the preservation of the majestic rhino. They hope that the sponsorship provided can help towards the production and distribution of 600 forensic kits for up to five Africa rhino range states this year.