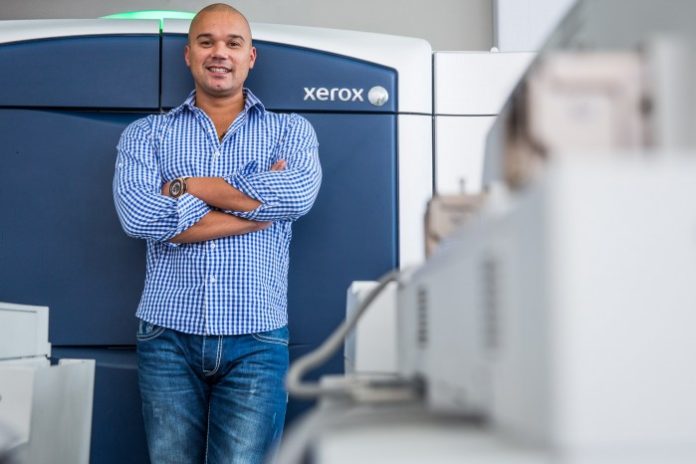 Cape Office Machines was the first authorised Xerox dealer in South Africa, and works closely with Bytes Document Solutions as one of the largest Xerox resellers in the Western Cape. From student walk-ins to precision printing for some of South Africa’s top brands, Digital Express has grown its business, and shopfloor, more than 400 per cent since opening its doors in Rondebosch, Cape Town eight years ago.

‘While we’re still servicing a large number of walk-in customers looking for standard business stationery and low-volume digital printing, the bulk of our business has shifted to higher-end promotional and point-of-sale printing, including tent cards, wobblers, swing tags and price hangers, for some of South Africa’s largest retail chains and restaurants,’ said Clay. ‘We complement these products with large format in store-banners, table displays and entry boxes, and offer a complete end-to-end service: from design to print, courier delivery and installation, anywhere in the country.’

Clay said the shift to upmarket commercial work goes hand in hand with tighter deadlines, so the company’s ability to meet the demands of time-sensitive projects like seasonal sales and weekly in-store promotions is absolutely critical. ‘We simply can’t afford even the smallest amount of downtime, so running a single digital press for the bulk of our display products is not an option.’

Cape Office Machines director Marco Ortelee said a multi-machine approach is the logical next step for commercial printers moving to the higher end of the market.

‘It makes business sense not only for production capacity but more importantly for redundancy,’ said Ortelee. ‘While Xerox machines are renowned for their reliability, they’re not infallible and like any other machine with moving parts they need to be maintained. Running two Versant presses in parallel means one press can be taken offline for maintenance without affecting production. It also means less overtime, and running identical machines makes them easier to use for the teams in charge of production.’

Since installing the dual Versant machines, Clay said the company’s operating costs have come down.

‘Even though we have other machines capable of producing consistent colour output, shifting to a different model would have slowed us down, and in our business time is costly,’ he said.

‘Switching between formats, from digital to litho, for example, introduces even more complexity, so the advantages gained by having two identical high-volume digital machines is negated to some extent. We wanted to avoid that scenario entirely, and it’s already paying dividend with the work we’re producing.’