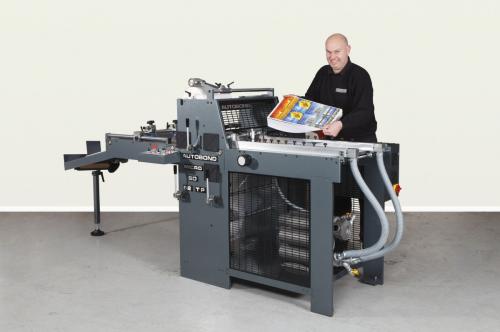 Autobond (Hall 11, Stand A23) announced the launch of an entry-level B2 thermal laminator, the Micro 52 SD TP – a heavy-duty commercial laminating machine that is aimed at the short run, multi-colour B2 and B3 markets, with its quick make-ready and tiny foot print.

Based on the technology of the Autobond Mini SD T series, the laminator is capable of producing at a speed of 25 m/min (2,000 sph of B2 and 4,500 sph of SRA3), has a footprint of just 2 m x 1 m, is backed by a powerful Heidelberg-Stahl suction drum feeder, and has a perfecting feature for two-sided lamination in one pass.

The Micro 52 SD TP has been developed as an easy to use, affordable option for printers that want to save money by bringing their lamination in-house.

According to John Gilmore, Managing Director of Autobond, “In tough times, everyone looks hard at the cost of sending work out and brings it in-house if feasible. The Micro 52 SD TP has been developed to meet that need. It’s an affordable machine which still utilises the high-quality design and German components that provide the robust build quality and reliability that Autobond customers require.”

The Micro 52 SD TP is being exhibited at Autobond’s stand at drupa (3-16 May 2012 except Sundays) alongside 5 other new laminating, encapsulating, and spot UV machines.