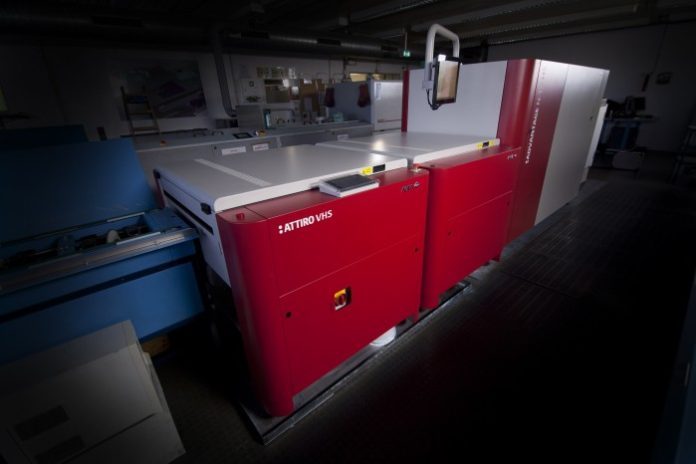 Agfa Graphics launched the Attiro VHS chemistry-free violet plates, built on the same revolutionary and patented cascade concept like that of the Attiro clean-out unit which was released earlier this year.

With an increased plate throughput speed of up to 3m/min, the Attiro VHS easily handles plates from platesetters imaging up to 400 plates per hour, such as Agfa Graphics’ newest Advantage N-TR VHS.

The Attiro and Attiro VHS are built according to a unique cascade design concept. There are three sections; the concentrated gum cascades from the third section into the second and later into the first. The gum is thus effectively reused three times, resulting in minimal gum consumption yet maximal clean-out effect. It allows users to save on maintenance and gum while contributing to a more sustainable prepress process.

‘At the WPE 2015, Agfa Graphics announces a series of new products. One of them is the new Attiro VHS, but there is also the new chemistry-free violet plate N95-VCF and several improved features for the Advantage N platesetters and Arkitex Production workflow software,’ Emiel Sweevers continues. ‘We want to show our commitment to this industry, both for print and for mobile, with continuous innovations.’

Since 2011, when Agfa Graphics launched the N94-VCF plate, more than 70% of Agfa Graphics’ newspaper customers made the switch to its chemistry-free plate technology.

Attiro VHS will make its global debut at the World Publishing Expo 2015 in Hamburg, Germany in October and will be available early 2016.