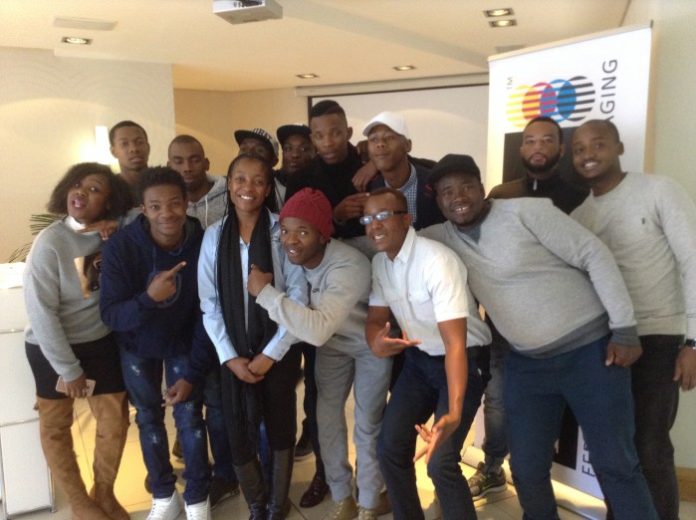 The programme was piloted in 2016 with a total of 16 learners in Gauteng and is already bearing fruit in the industry, with an additional 24 learners having graduated thus far in the Western Cape and Gauteng.

Carrington Muliwa and George Mosako are just two of the graduates of Printing SA’s Commercial Digital Printing Programme who have had success stories.

Muliwa is also the 2017 bursary winner of a fully sponsored course by Printing SA. He had wanted to run a printing business since his high school days. When he inherited an old broken printer and Pentium 3 laptop from his late uncle, he set about repairing them and then started his own business from home, formulating CV’s for job seekers as well as producing other printed material. However, due to a lack of business skills, his enterprise stalled. However, he never gave up on his dream of owning a printing business. Last year, he began saving and eventually purchased an A24 vinyl plotter, multi-functional heat press and a sublimation printer. His goal was to rebuild his business and provide an opportunity to members in his community by assisting job seekers with well-presented and well-written CVs.

Speaking after the graduation programme, Steve Thobela, CEO of industry body Printing SA, said South Africa’s printing industry is working hard to develop entrepreneurs who can ‘pay it forward’ by employing others. At a time when unemployment is rife, empowering South Africans to seize opportunities to create their own businesses rather than stand by helplessly waiting for jobs is imperative. However, this cannot be achieved sustainably without skills development.

Thobela explained, ‘Muliwa certainly showed his commitment and dedication and we are thrilled at having provided him with this opportunity where he will be given some much needed skills to grow his business. The course included subjects such as an introduction to digital printing, inks, colour, media, finishing and overview of machines. We are convinced this will take his business to the next level.’

‘I definitely feel more confident about the success of my business and will use everything I have learnt. I am so grateful for being awarded this bursary as it has given me a second chance to make my dream a reality,’ said Muliwa.

2015 also saw the South African Reserve Bank win R10,000 as part of the 2015 International Day of Print Competition. They requested that this be used for internal training and George Mosako, one of their employees, was chosen as the most deserving candidate.

Now having completed the programme, Mosako said he was ecstatic to have been granted the opportunity to not only further his skills but also to formally graduate with a qualification that will allow him to make more of a contribution to the company.

With a successful 2017 to date, Thobela said that, during the latter part of 2017, a further 16 learners are expected to be enrolled in the programme from the Western Cape and KwaZulu-Natal. He hopes that more learners will become entrepreneurs after successful completion, and that more established businesses will sponsor willing candidates to develop their skill set.

Showing their contribution to the industry, Konica Minolta South Africa recently employed Brian Chauke, one of the graduates from the Printing SA Commercial Digital Printing programme. He will participate in a 12 month long learnership as he passed their online assessment and progressed to their first interview process. Konica Minolta South Africa’s partnership with Printing SA began in 2014, when they both created and facilitated a comprehensive training programme for 20 female business owners.