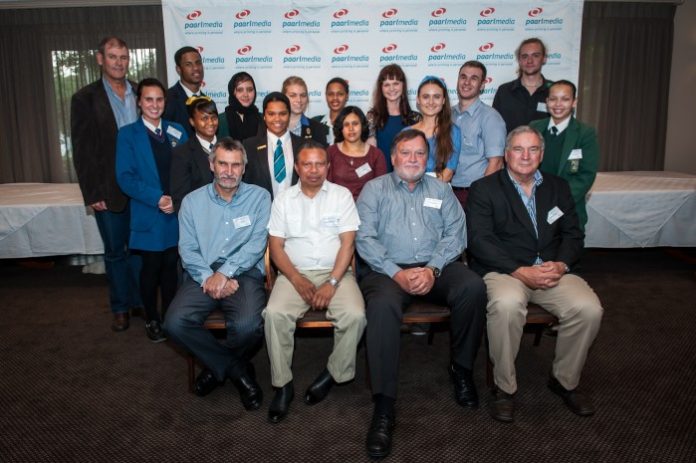 The Paarl Media Group held a ceremony on 22 October to officially congratulate 13 new bursary recipients. Overall, a total of 39 students will be starting the 2015 academic year sponsored by the Paarl Media Bursary Trust. With the drive to improve the quality of education in our schools, this year a category was created for applicants interested in pursuing a degree in education.

Youth between the ages of 15-29 are categorised as the highest unemployed group of people in South Africa. This concern stretches globally and the responsibility to assist in developing future leaders rests on public and private organisations. The Paarl Media Bursary Trust is rooted in the belief that education is a mechanism for upliftment and the trust annually supports promising school-leavers who require financial assistance to study in the field of their choice.

Lambert Retief, chairman of the Paarl Media Bursary Trust and non-executive chairman of the Paarl Media Group said, ‘The impact that well-trained teachers have on learners is significant and to encourage this, bursaries were set aside for students wishing to become school teachers. When you invest in the development of teachers, the influence extends to the improvement of an entire community.’

Lambert continued, ‘Bursary holders are aware this is a two-way transaction. The Paarl Media Bursary Trust has done its part by investing in their future; the responsibility now rests on recipients to diligently attend all classes and commit to give their best throughout.’

Nico Grobbelaar, executive director for human resources at Paarl Media Group said, ‘We received 68 applications this year and were only able to fund 13 new bursaries for 2015. Since 2008, the bursary trust has supported students studying a range of courses such as medical degrees and clothing design. This year, of the 13 bursaries awarded, the majority of recipients were female and were awarded in fields of study outside of the print industry.’

Applicants are required to meet the basic conditions in order to qualify for a bursary, these include financially disadvantaged candidates who display leadership attributes and community involvement and hold a commendable academic school record.

‘The trust exists to create opportunities for committed learners with bright futures. This mechanism is an example of similar initiatives provided by the Paarl Media Academy. The Paarl Media Academy, located in Paarl, is focused on harnessing the future leaders of the print industry through offering comprehensive professional training opportunities such as apprenticeships and sales graduate programmes. This ultimately assists in lowering the levels of youth unemployment in South Africa,’ concluded Grobbelaar.