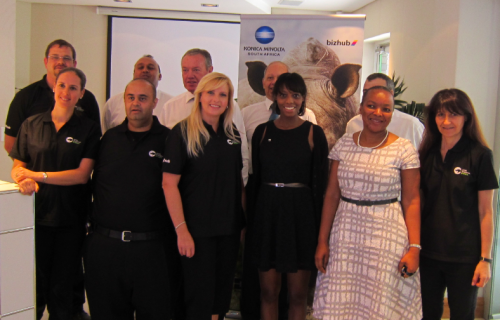 According to WWF, our substantial financial donation to the programme over the past year has helped in the South African rhino DNA index system, called RhODIS, contributing evidence to more than 400 investigative rhino poaching cases in South Africa, said Alan Griffith, MD of Konica Minolta South Africa.

Puleng Mosholi, Corporate Relations Officer: Business Development, WWF-SA, thanked Konica Minolta for its continued support, especially during this time when a record high of 560 rhinos have been poached this year. The high amount of rhinos poached this year is an incredibly serious issue, however, at WWF were positive that we can solve this problem. We are able to fight poaching with the help of partners like Konica Minolta.

Mosholi said that Dr Joseph Okori, the head of WWFs African Rhino Programme, and Dr Cindy Harper, Director of the Ondersterpoort Veterinary Genetics Laboratory at the University of Pretoria, were able to get buy-in at a recent meeting from nine different countries for the RhODIS system, including Malawi, Kenya and Botswana.

For more information on the African Rhino Programme, visit: http://tinyurl.com/75vdrkq