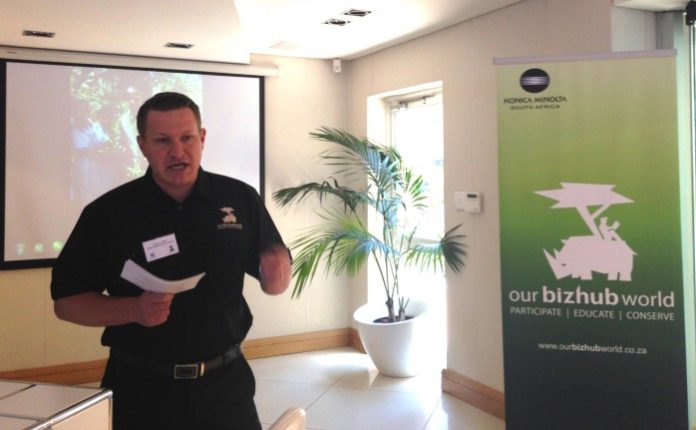 The company unveiled its new ourbizhubworld logo, which features a young boy reading an iPad, on the back of a rhino, under an African tree. It illustrates the company’s most fundamental and spirited commitments: to participate, educate and conserve our unique country. ‘The logo is the illustrative embodiment of our philosophy and ambition regarding conservation and corporate social investment and development in our country, and that is the need to participate in economic and communal aspects of South Africa,’ said Andrew Griffith, product manager for office products, Konica Minolta South Africa.

Konica Minolta invited representatives from the various organisations it supports to educate attendees on what they do and how Konica Minolta has bolstered their effectiveness and efforts.

‘We started our journey with planting trees, by partnering with Food & Trees for Africa, and it was through understanding the communal and environmental benefits of planting trees in underprivileged areas that we knew we had to ‘walk the talk’ as an organisation. We couldn’t just tick the box in terms of offsetting our carbon footprint, we actually had to attain and retain carbon neutrality and we’re proud to say that we’ve managed to retain our carbon neutral status,’ said Griffith.

In 2013, Konica Minolta South Africa became one of the first corporates in South Africa to offset their direct and indirect greenhouse gas emissions (offsetting a massive 15% more than required), resulting in them being awarded carbon neutral status. Their green journey has included planting more than 18000 trees, many of which have been fruit trees, as well as 4600 bamboo plants (in partnership with Food & Trees for Africa) in a bid to stimulate enterprise development.

Working in underprivileged communities, the company then identified the need for education. The team transformed a light commercial vehicle into a Mobile Library and IT Centre, and based on the success of the company’s touring literacy project, the team went one step further to pilot bizbook corners: scaled-down, fully-equipped, ‘pop-up’ libraries. Today, eight primary schools in Gauteng are the proud owners of a bizbook corner and together with the Mobile Library, in partnership with The Edu-Care Foundation, KMSA’s passion to deliver books, stories and interactive, exciting multimedia reaches more than 10000 schoolchildren.

The company then launched its first bizIT centre, a complete IT lab at Toekomsrus Primary School in Randfontein. The company also became involved in anti-rhino poaching projects; as well as developing and implementing a skills development programme aimed at empowering young, disadvantaged school-leavers who might not have the means to study further. To date, 11 young women have been recruited from the programme into full-time positions at Konica Minolta South Africa.

Konica Minolta’s most recent initiative is the pioneering bizhub Conservation Academy, situated in Mpumalanga. Managed by the Good Work Foundation, the Academy blends the best of digital, multimedia learning, skills development and ‘conservation literacy’ to offer specialised career training to rural, young South Africans, empowering them to be able to take part in the economy of wildlife, including wildlife security.

The vision for the bizhub Conservation Academy is to become a prototype of what can happen when proudly South African corporations, conservationists, educators, combined with the use of technology and young people come together to create communities that are passionate about South Africa’s green economy.