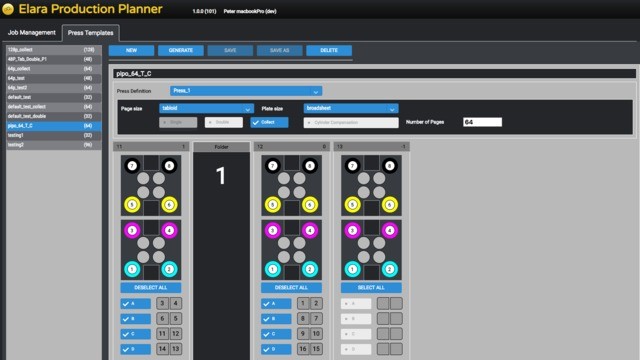 Fujifilm will introduce two new solutions to its newspaper portfolio, both reinforcing its commitment to making newspaper production more profitable as part of its Superia initiative.

Superia has seen considerable success in the commercial print market since its introduction, with its simple aim of reducing the resources used in offset printing in the form of materials, labour, water, energy and waste. Fujifilm has now applied these ideals to newspaper production, with a particular focus on improving automation and reducing material usage and waste.

Fujifilm will therefore be showcasing two new modules as part of its Elara 5 Workflow, Elara Production Planner and Elara PDF, and will also unveil a new addition to its Luxel VMAX range, the Luxel VMAX 600, on show at the IFRA World Publishing expo (9-11 October 2018, Berlin) in concept form and set to be the fastest CTP device on the market.

Elara Production Planner is a unique new workflow tool that allows Elara users to plan newspaper editions based upon press configurations that can be created from inside the Elara 5 system. Software-to-press interfaces are often extremely expensive (sometimes the interface costs even more than the entire workflow software) but such expensive systems are no longer needed. Elara Production Planner takes care of press configuration and template setup directly, from which the workflow gets all the information it needs. It also automates the process of page pairing, press cylinder correction and plate-stacking and sorting.

Elara PDF is a new tool (available for all major platforms: Windows, Apple Mac and Linux) that can check, repair and normalise PDF files before production. Many newspaper printers get PDF files from external parties and these can have a range of specific issues that need to be addressed, such as RGB format images, thin lines, incorrect versions, missing fonts, low-resolution images or overprinted text. Elara PDF finds and fixes these issues where possible and notifies the user via the user interface or by email. This versatile system also offers pre-flighting, picture enhancement, ink-saving, PDF flattening, anti-aliasing and more. A version that includes the high speed and comprehensive Elara RIP is also available.

Fujifilm this year is demonstrating its leadership in newspaper systems by showcasing how even greater levels of speed and efficiency could be achieved with the technology showcase of the Luxel VMAX 600, set to be the fastest CTP device available. Thanks to its cutting-edge laser technology and optimal plate-loading functionality, it can operate at unrivalled speeds.
While punch bender manufacturers and processors still struggle to keep up with these types of speeds, the Luxel VMAX 600 showcases what is possible in terms of raw plate imaging speeds. Fujifilm will, therefore, be reviewing customer interest with a view to introducing it as a commercial system at a later date.