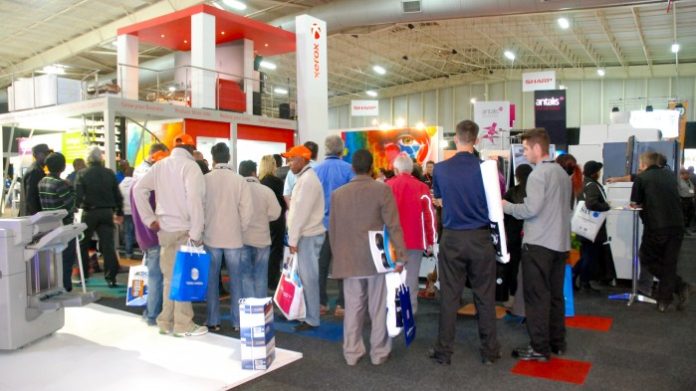 Bytes Document Solutions (BDS), the authorised Xerox distributor and a platinum sponsor of Africa Print, exhibited this year at the Gallagher Convention Centre from 2-4 July 2014. The show was co-located with Practical Publishing’s inaugural FESPA Africa exhibition.

‘In addition to these machines, some of Xerox’s heavy-hitting production presses, including the iGen150 and Versant 2100, were demonstrated. These enjoyed a constant stream of interest with visitors particularly impressed by image quality which rivals offset printing, while incorporating a range of finishing options.’

Haglich said the devices weren’t just on display they were at Africa Print to work, too. ‘We printed 1500 copies of the conference’s daily expo newsletter, an 8 page saddle-stitched booklet, in just 90 minutes. That’s impossible to achieve with traditional offset press and finishing equipment.’

With traditional business models under pressure, he says no commercial printer can afford to ignore the flexibility and rapid response enabled by digital presses. ‘Long print runs are growing scarce and customers are increasingly demanding faster turnaround for smaller jobs. That means the printers who have digital presses are getting the work as they can respond quickly with machines that incorporate finishing on a single device,’ Haglich explained.

Even  longer-run jobs are being handled by these devices as high-speed ink jet presses enter the market in tandem with the cost of colour output coming down to rival that of offset production. ‘Already, we’re seeing book printing and specialty magazines in particular being produced by ink jet presses and of course when it comes to printing variable data output such as statements and invoices, digital printing is the only solution,’ added Haglich.

Further evidence of the trend towards rapid response is reflected in the interest shown by expo attendees in Xerox’s IJP 2000 wide format printer. ‘This machine can print seven A0 posters in just one minute. That attracted considerable attention as there is no other wide format device on the market capable of producing large format posters at that speed,’ continued Haglich.

The Xerox IJP 2000 is primarily designed for the Point of Sale market, where the typical print run for posters is 40 and the ability to handle variable data formats is a necessity.

Retail posters are an excellent example of how printing is evolving, noted Haglich, ‘These are typically required on-demand with very fast turnaround to support time-sensitive marketing and promotional campaigns. Printers need specific solutions like the IJP 2000 to address this niche market cost effectively and, above all, within the short timeframes presented.’

As a sub-Saharan African event, the Africa Print and FESPA Africa expo drew considerable interest not only from the South African market, but from neighbouring countries too. ‘Print is changing, with market forces including the internet having an impact on what is printed, when it is printed and in what volumes. Vendors like Xerox are responding with devices that equip printers to profitably deliver what their customers want with fast and efficient machines. As a result, digital printing is a firmly entrenched tool across the region,’ Haglich concluded.