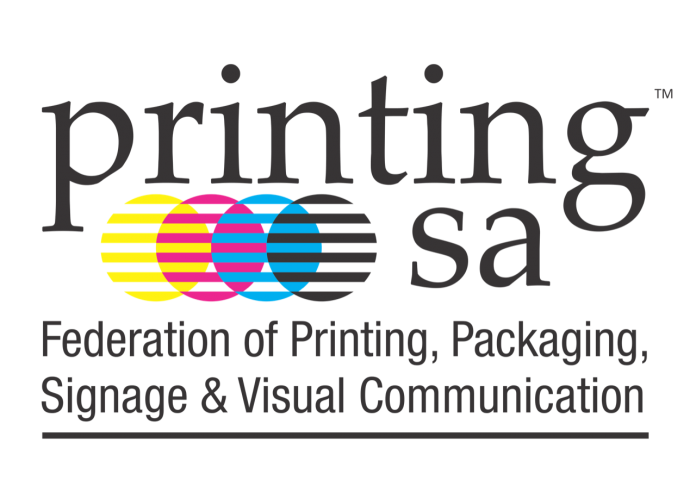 Printing SA CEO, Dr. Abdool Majid Mohamed, writes that the environment is facing a major and growing crisis, and emphasises on the remedial measures that must take place.

Archbishop Desmond Tutu recently said that we fought apartheid successfully, now we need to fight climate change with the same focus and dedication. He said that unfortunately those who have no involvement in creating the problem are most affected – that is the ordinary citizen – while those who have the capacity to arrest the situation, mainly governments and multinationals, dither – and that is the deep injustice. Now we have to fight what he termed as ‘blue apartheid’.

While government can be complimented for institutionalising Operation Phakisa to grow the ocean economy, boost economic growth and create jobs, the project falls short of a focus on the sustainability of our oceans. Instead, government has prioritised, and some say subsidised, the establishment of potentially devastating and destructive offshore oil and gas industry exploration.

The multinational Shell has recently been given the green light to survey over a period of five months our pristine Wild Coast in search of oil and gas, and will bombard the sea floor every 10 seconds for 24 hrs a day using high pressure air that could maim or kill all sea life permanently. This is a catastrophe about to happen on our doorsteps, and we all need to urgently do something about it.

It is sad that while the Department of Forestry, Fisheries and the Environment  (DFFE) is being proactive in waste management and ensuring air quality with minimised emissions, and that the Department of Tourism is trying to grow international and local tourism in pristine areas like the Wild Coast, another Department, that of Minerals and Energy, has been given the green light for offshore exploration. This dichotomy is bound to have serious long term negative impacts on the fragile economy of the Eastern Cape.

Scientists have predicted that if nothing is done within the next eight years (ie. the next 3000 days), global warming will increase by 1.5°C, and this will unleash a climate catastrophe that could signal the end of life of earth. We only have a short window period to halve carbon emissions – this is how desperate the situation has become.

We are already at 1.2°C of heating, and can see the effects on the planet. In 2021, torrential flooding in China and Western Europe killed hundreds, raging wildfires have destroyed entire towns (and these were visible from outer space), deforestation has altered the landscape in the Amazon permanently and drought and famine will turn millions into climate refugees.

The sea level rise caused by global climate change is an existential threat to all coastal regions, in particular the low lying island destinations in the world. At the current rate of global warming, almost 80% of the Maldives could become uninhabitable by 2050.

The global climate summit that wrapped up in Glasgow is known as COP26, with CoP standing for Conference of the Parties, and 26 being the 26th annual event. In diplomatic parlance, ‘the parties’ refers to the 197 nations that agreed to a new environmental pact, the United Nations Framework Convention on Climate Change, at a meeting in 1992.

The overall aim was for net zero emissions by 2050, and to not surpass 1.5°C of temperature. Some of the positive and noteworthy achievements of CoP 26 were:

• Green finance, with more than 450 banks controlling $130 trillion agreeing to support clean technology and move money away from industries that burn fossil fuels.

• An interesting deal was the ‘Glasgow Leaders’ Declaration on Forest and Land Use’. This historic declaration was signed by over 130 countries, among them China, the USA and, crucially, Brazil, and aims to halt and reverse global deforestation over the next decade. The deal includes £5.3bn of new private finance, and £8.75bn of public funding for restoring degraded land, supporting indigenous communities, protecting forests and mitigating wildfire damage.

It is estimated that deforestation accounts for almost a quarter of all greenhouse gas emissions, with forests largely cleared for agricultural purposes such as growing crops for palm oil, soy, and feeding cattle. Brazil, Russia, Indonesia and Democratic Republic of the Congo collectively account for 85 percent of the world’s forests.

Tropical deforestation accounts for being the third largest emitter of carbon dioxide on Earth. On the flip side, if forests are left to grow, they remove over 7.6 billion tons of carbon from the atmosphere every year, which is roughly 20% of global emissions – so forests play an integral part of the regeneration efforts.

On the down side, the final Glasgow Pact signed resulted in the watering down of the phrase ‘phasing out’ to ‘phasing down’ of coal and fossil fuel usage. Coal alone is responsible for 40% of annual CO2 emissions. The agreement – although not legally binding – will set the global agenda on climate change for the next decade. The agreement pledged to significantly increase money to help poor countries cope with the effects of climate change and make the switch to clean energy.

While progress was undoubtedly made in some areas, many people felt it was just not enough. But it has provided a platform to build upon when countries return to the negotiating table next year to sharpen their resolutions and increase their vows to cut emissions. Until then, we should celebrate the successes and continue to shout about the inherent sustainability of the print and paper industry (acknowledgement: Two Sides).

Measuring carbon emissions and carbon quotas is becoming more mainstream. There are two carbon calculators that have been developed and are in use, particularly in Europe. The calculation covers all six greenhouse gases (GHG) defined in the Kyoto protocol, expressed as carbon equivalents. These gases are carbon dioxide, methane, nitrous oxide, sulphur hexafluoride and two groups of gases (hydrofluorocarbons and perfluorocarbons).

The majority of the printing sector however consists of small or micro enterprises, in need of a simple model which is easily applicable to their activities.

When following the EU recommendations, a printer will be able to identify around 95% of its total CO2 emissions within the defined scope. The current analyses were based on sheet fed and heatset offset as well as publication gravure printing.

Direct emissions from combustion cover exclusively fossil fuel. The Intergraf recommendation for calculating carbon emissions from printing activities is described in the table below. All the parameters in the table are defined as either ‘Site relevant’ or ‘Product relevant’ to point out where the customer may influence the carbon footprint of the printed material. 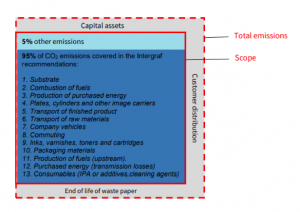 ClimateCalc takes a lifecycle perspective to provide exact information on the climate impact of individual graphic products produced in Europe. It takes into account data about the raw materials used to create the product, as well as about the graphic company producing it. The system is available in several languages and used in 17 countries.

Under the European Green Deal, the European Commission has announced a sustainable product policy legislative initiative. It is designed to make products fit for a climate neutral, resource efficient and circular economy; to reduce waste; and to ensure that the performance of frontrunners in sustainability progressively becomes the norm. Reducing carbon and environmental footprints is among the sustainable principles that the commission will promote in its new initiative.

In addition, the commission is due to propose measures on substantiating green claims. The aim of these measures will be to combat greenwashing, as well as to empower consumers, companies and other market actors to make sense of the various environmental labels that are active in the EU. Source: Integraf.

FESPA Confirms Dates Of All Global Events In 2023