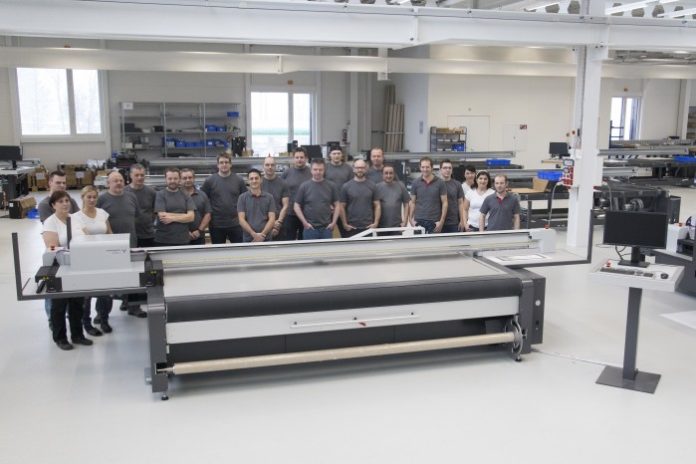 SwissQprint has announced the delivery of its 500th printer. Atelier Bischof, a signage services provider based in Switzerland, purchased a Nyala 2 UV inkjet printer and their machine was the 500th to be shipped by its Swiss producer swissQprint.

Atelier Bischof is a family-owned company and celebrated 50 years in business last year, and for its anniversary decided to purchase a new UV printer. They chose a Nyala 2 and the large-format printer went into operation on 4 February 2015.

The Nyala 2 UV printer delivers a maximum output of 206 square metres per hour. Its generously sized 3.2 × 2m printing table affords plenty of space for popular board formats. Equipped with the roll to roll option, it can also handle all kinds of jobs based on roll stock. Nine freely configurable colour channels as well as other options make it a universal production workhorse, which can also keep going non-stop in tandem operation.

So it was also this large-format printer’s versatility, print quality and performance that tipped the balance for Atelier Bischof. Managing director Roger Neff had the machine demonstrated on site several times, putting it to the test with tricky print jobs.

A swissQprint delegation accompanied the delivery of their 500th machine on 4 February. Sales partner Spandex was also on-site for commissioning, and congratulated both customer and supplier on the occasion of this milestone.

Incidentally, it is the first Nyala 2 printer to find a home inside Switzerland. This model celebrated its world premiere at last year’s FESPA in May.