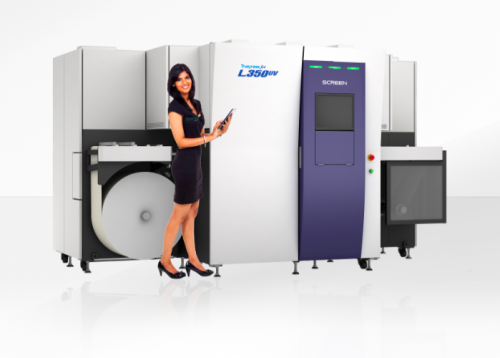 A preview model of the Truepress Jet L350UV was first shown at drupa 2012. Since then the press has been further refined ready for the launch of the production version today and its commercial availability throughout EMEA. As a result, the innovative Truepress Jet L350UV is the fastest digital label press currently available at over 16sqm of label stock per minute on a 350mm web and delivers photo-realistic quality, fast job turnarounds and stable output.

The press is engineered as either a roll-to-roll press for near-line finishing, or with the ability to feature automated in-line finishing such as lamination, die-cutting, foiling, coating and embossing etc.

The first European showing of the Truepress Jet L350UV will be at Labelexpo Europe (24-27th September 2013, Brussels) where it will be demonstrated by both Screen (Stand 9G50) and Dantex (Stand 5D20).