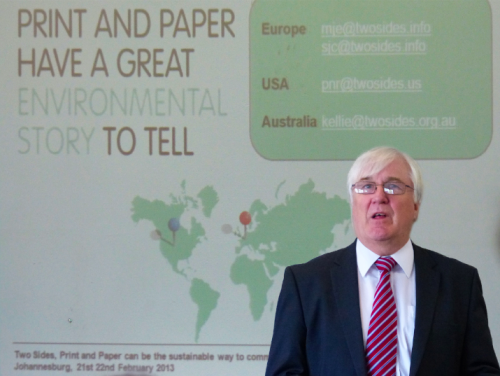 Two Sides promotes the responsible production and use of print and paper and dispels common environmental misconceptions by providing users with verifiable information on why Print Media is an attractive, practical and sustainable communications medium. In February this year, Two Sides sent an open letter to Eric Schmidt, Chairman and CEO of Google in response to the Googles Go Paperless campaign, highlighting Two Sides’ concerns that Google and others are trying to promote their services as environmentally preferable to print and paper whereas there is significant evidence that electronic communication, including Google’s activities, carry a significant and increasing environmental footprint.

PRINTING SA is looking to appoint an independent country manager and will establish a management board, sustainability group and marketing group as well as a membership charter for Two Sides South Africa.

The Two Sides campaign tackles environmental arguments head-on but doesnt attack other forms of media. It states that there is a place for print and paper and it is backed by facts and research, which is localised for various regions that Two Sides operates within. PRINTING SA will localise this research, said Deon Joubert, National President of PRINTING SA. It is critical for the sustainability of the printing industry to tell our side of the story.

Customer Experience Is Key In An Unpredictable Environment