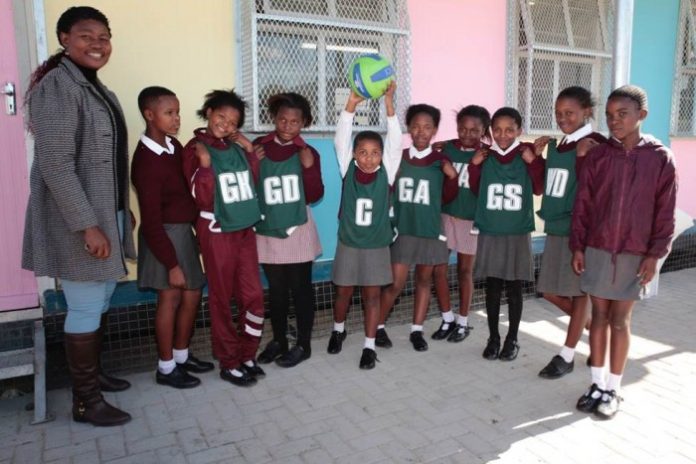 In honour of Nelson Mandela Day, employees from Novus Holdings volunteered 67-minutes of their time on Monday, 18 July, to bring some positive change to the Marconi Beam Primary School.

Established in 2004, Marconi Beam Primary currently has 1568 learners, who are primarily from the Joe Slovo informal settlement. Situated less than a kilometre away from their Montague Gardens offices and facilities, some Group employees decided to roll up their sleeves and lend a helping hand by painting classrooms and an existing jungle gym, as well as cleaning the school grounds by removing litter and rubble.

‘At Novus Holdings we believe in giving a hand up and not a hand-out. Making a positive difference in the communities in which we operate is always a priority for us. Every hand up contributes to making a change,’ said Peter Metcalfe, Group Executive of Sales and Marketing at Novus Holdings, previously known as the Paarl Media Group.

With the school needing varied support, the Group’s involvement was focused on contributing towards sporting activities for the learners, ensuring that their break-time areas were safe and clean, and providing the Grade R classes with some essentials such as filled pencil cases, magazines and reel ends that can be used for child development in creativity and expression.

The Group arranged for a new jungle gym to be installed in the main play area and donated soccer balls and bibs for two teams, as well as netball bibs, poles with nets and balls for two teams. Training cones and whistles were also provided for physical education activities.

‘We are very grateful for the support we have received from Novus Holdings. Our learners are so excited and seeing them play with the new equipment is warming our hearts,’ said Bukelwa Plaatjies, Principal of Marconi Beam Primary.

‘This contribution directly aligns with our Future Foundations initiative, which aims to build strong foundations for future growth by focusing on improving education and empowering learners, developing the skills of our local workforce and engaging with our communities,’ concluded Metcalfe.