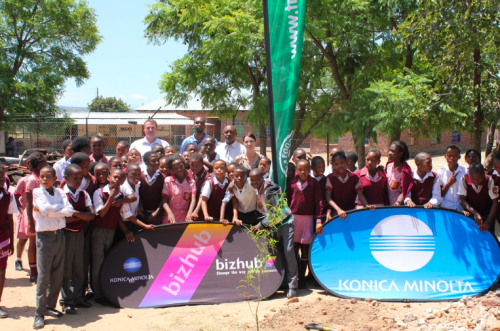 Konica Minolta South Africa has planted 2013 trees at impoverished schools in the Polokwane and Kimberley regions. The company has supported South Africa’s national greening and food gardening social enterprise, Food & Trees for Africa (FTFA), for five years and this recent donation brings the total of trees donated by the company to 17678.

FTFA selected nine schools in Polokwane, Limpopo, and 38 in and around Kimberley in the Northern Cape to receive the indigenous and fruit trees.

Before the trees were planted, the school children were educated on the importance of proper ground preparation, planting techniques and aftercare. This ensures that the trees will flourish and will be enjoyed by generations to come. This complemented the schools’ own teachings on nature and sustainability. Now the trees become the responsibility of the school – but, we will still remain involved, with both the schools and the community, said Gerhard Kruger, Kimberley branch manager.

Konica Minolta South Africa employees got thoroughly involved with the planting of the trees along with the schools’ staff and children, and found it to be a greatly rewarding experience, said Morne Etchell, Polokwane branch manager. The primary purpose of the trees is to provide shade for the school children, to sit and play beneath during the hot summer months, but they also beautify the school and its surroundings.

The beautification of schools has been linked to improved academic performance. According to a 2010 study entitled Student performance and high school landscapes: Examining the links, students performed better academically at schools with more nature around it; they were more likely to graduate and less likely to commit a crime.

The partnership with FTFA began in 2008 when Konica Minolta South Africa contributed 4100 trees to Orange Farm, a large informal settlement located about 45 kilometres from Johannesburg. As a result of the success of the project, and the need to offset more carbon dioxide emissions, Konica Minolta South Africa committed to planting further trees in the Eastern Cape, Limpopo, Northern Cape, KwaZulu-Natal, Mpumalanga, Gauteng and Western Cape regions.

So far 11000 trees have been distributed through FTFA’s Trees for Homes initiative, which is a registered carbon offset programme under the Carbon Protocol of South Africa. The remaining 6678 trees have been distributed through the Trees for All initiative. By taking travel, electricity and paper usage into account, the FTFA online carbon calculator provides a high level estimation of a company’s annual carbon footprint as well as the number of trees it will take to absorb that amount of carbon.

As part of our corporate social investment initiative, we have committed to the FTFA Carbon Offset programme in an effort to further offset our carbon emissions and one of the best ways to do this is by planting trees. This initiative has proven to be so successful, that Konica Minolta South Africa reached ‘carbon neutral’ status last year. In addition to absorbing carbon dioxide, one of the most important greenhouse gases, these trees provide many other environmental and social benefits such as preventing water runoff and erosion, settling the dust, providing shade and shelter, lessening noise and beautifying neighborhoods, said Alan Griffith, MD of Konica Minolta South Africa.

How The Packaging Industry Can Contribute To A Sustainable Future