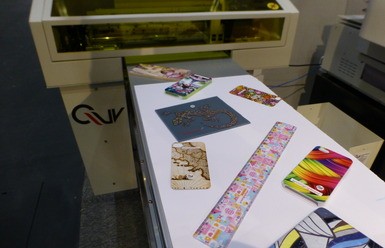 This low-cost Q UV inkjet printer was made by Croatian manufacturer Azon, and was on the stand of the firm’s distributor IGS. IGS is also a new venture, having been launched six months ago by Peter Flynn, the former sales director at HighWater, and Steve Charlesworth, who was previously a salesman for Heidelberg.

The Q UV features a self-adjusting single-pass printhead assembly that traverses the vacuum print bed. It prints in CMYK plus white.

Charlesworth said, ‘It can print onto ceramics, wood, plastic, phone covers, golf balls, etc. We’ve even had someone who’s interested in using it to print onto coffins. Print speed is around 4sqm/hour, and the maximum resolution is 1,440dpi. ‘The ink cost is around 82p per square metre,’ he added.

Flynn said the Q UV can also be used to ‘expose’ process less printing plates, by printing directly onto them. ‘We’ve tested it with the Dotworks Tango plate. By printing just cyan it will image the plate. It’s an ideal option for low-volume users.’ Two other new Azon printers, a solvent device and direct-to-garment t-shirt printer, were also on show.

IGS also had kit from Chinese plate and prepress kit manufacturer Konita on its booth, including the UV-800 platesetter which is based on the old Creo Trendsetter design. Konita had been working with Creo prior to the latter’s acquisition by Kodak in 2005, but Kodak subsequently dropped the project.

The platesetter is available in UV and thermal versions, and can output low-cost conventional plates at 44pph, or thermal plates at 28pph. ‘It’s so cheap. It’s perfect for the packaging market,’ Charlesworth added.