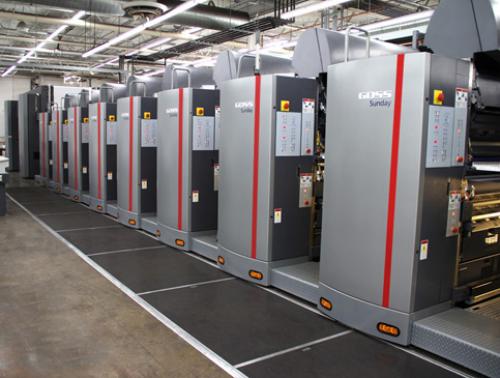 Goss International has merged its two operations in France as a single corporate entity on 1 January 2012, a move which will enhance service to customers through its manufacturing and support centres in Europe. The organisational move will not impact capabilities or the size of the workforce at the major European facilities that Goss International maintains in Nantes and Montataire, France as well as Preston, England and Boxmeer and The Netherlands.

We continue to provide printers and publishers with a unique combination of local responsiveness and a worldwide manufacturing platform, including major press and auxiliary manufacturing operations in Europe, according to Jochen Meissner, Goss International president and CEO. Merging legal entities in France is a natural step that will increase transparency for our customers.

Goss M-600, Sunday 5000, and Sunday 4000 commercial web presses as well as Colorliner, Uniliner and Universal newspaper press models are manufactured at the Goss International facility in Montataire. The Nantes facility maintains responsibility for engineering and service for the above-mentioned newspaper press models.

Among projects currently in process at the Goss Montataire facility are a Colorliner CPS eight-tower newspaper press that will be delivered to Scotland in 2012, a Sunday 5000 96-page web press that will be installed in Germany, and Sunday 4000 short-grain presses for printers in Germany and France.

Goss International supplies press and finishing systems – including the most automated and productive web offset presses in the world – for magazine, newspaper, catalogue, packaging, direct mail and other printing applications. The company is headquartered in Durham, New Hampshire (USA) and has major manufacturing centres in North America, Asia and Europe as well as a global sales and support network.