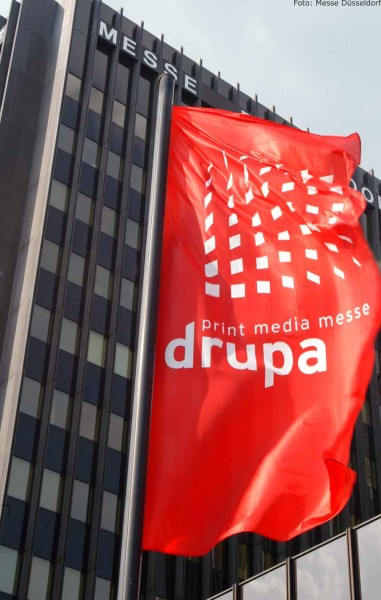 Drupa, the flagship fair for print and crossmedia solutions, will be re-launched with the slogan ‘touch the future’ and will focus on the industry’s innovative strength and establish a platform for future technologies. The re-launch was announced at interpack 2014, which took place from 8-14 May.

Werner Matthias Dornscheidt, President and CEO Messe Düsseldorf, summed up the drupa’s unique selling point at his press conference on 12 May, ‘The drupa trade fair presents innovations and trends, provides hands-on experience of the printing and media industry, makes visions come to life and turns investments into real products. During more than sixty years, the drupa has been tried and tested, and has never failed to impress, the drupa 2016 will be no different.’

The secret of this event’s success can be summed up in three points: trend spotting, active endorsement and tailored trade show concepts.

The printing industry is undergoing radical structural changes and far-reaching consolidation processes. At the same time, new technologies such as functional printing, printed electronics and 3D printing, which have significantly increased their market share, provide major opportunities and potential for growth.

The same applies to applications and solutions in the area of digital printing, package and label printing as well as to the industrial production segment. ‘It is precisely on these areas that the drupa’s structural realignment and repositioning measures are focused, highlighting the industry’s innovative strength.

‘Together with our partners, the VDMA, our member companies Heidelberger Druckmaschinen, Koenig & Bauer, Kolbus, Leonhard Kurz, manroland web systems, Polar-Mohr, technotrans, Voith, Windmöller and Hölscher – to name but a few, and global players such as Bobst, Canon, EFI, Gallus, Hewlett-Packard, Ricoh and Xerox we have developed the concept for the drupa’s re-launch,’ said Dorscheidt.

The drupa 2016 will stand for ‘Print and Crossmedia Solutions’. All technical processes related to the areas of printing and crossmedia, the entire range of applications and business areas will be presented at the drupa 2016. Solution-oriented technologies and applications as well as innovative business ideas or best-practice examples will be in the spotlight.

The drupa has defined salient issues with acute market relevance and significant potential which are already playing an important role in the market or will do so in the future. These are: package printing including digital label printing, multichannel publishing and green printing. The implementation of strategic activities such as separate events, event formats and systematically addressing the industry’s target groups will define the drupa’s strategic re-alignment in these areas.

In addition to this strategic realignment the drupa’s corporate design received a complete makeover and a new key signifier which highlights the innovative strength of this industry. It was important to retain tried-and-tested elements such as the pixel logo and the colour red, while conveying a new image which underlines the claim of the new drupa.

The slogan ‘touch the future’ puts a spotlight on the industry’s innovative strength and future technologies such as printed electronics and 3D printing. The drupa 2012 launched and prepared the market for pioneering technologies, and they have become increasingly integrated into the trade fair concept. In cooperation with the partners Organic Electronics Association (OEA) and Association in Europe for Specialist Printing Manufacturers of Screen, Digital and Flexo technology (ESMA), the Printed Electronics Products and Solutions (PEPSO) brand was established.

This issue was initially addressed by introducing a special show and roadmap, which has now been developed into a unique concept. Since its premiere in 2012, the PEPSO brand has been systematically advanced and featured at six flagship fairs glasstec, COMPAMED, EuroCIS, K, EuroShop and interpack. This evolution will also become evident at interpack 2014 where international exhibitors will present the latest trends and developments in functional printing and printed electronics.

The drupa handles the issue of 3D printing with the same strategic approach, and has introduced the ‘3D fab + print’ brand, which is supported by the VDMA with its affiliated Printing and Paper Technology association. The importance of additive production methods for tooling, component production, medical technology and manufacturers of consumer goods is substantial. Therefore, this subject will take centre stage during the Bright World of Metals, MEDICA, COMPAMED and, naturally, at the drupa 2016.