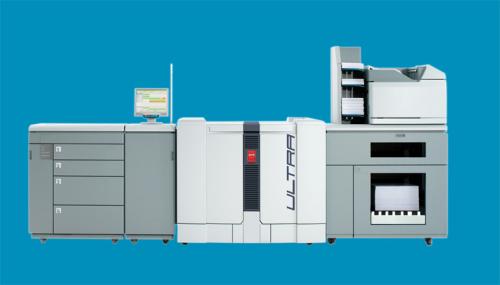 Bidvest company, Océ South Africa has announced that its VarioPrint 135 and VarioPrint 6320 devices have been named as the winners of the Buyers Laboratory LLC (BLI) new PRO Awards, honouring the best-in-class monochrome production print devices tested. It has received a rare five star rating for image quality.

As the leading independent tester of hardware and software for the document imaging marketplace, BLI has unmatched expertise in evaluating production devices and the key aspects of their performance, said David Sweetnam, head of European Research and Lab Services for BLI. In the highly competitive and complex world of production print, choosing the most suitable device for your workflow is a tough task. BLIs comprehensive production test suite makes the task easier by revealing how these devices actually perform in real-world workflows, which is often a far cry from what a vendors brochure might lead you to believe.

BLIs field evaluations entail three full days of intensive testing during which tens of thousands of impressions are printed, from 30000 to more than 150000, depending on the model. Devices are tested for productivity with coated and uncoated media in a wide range of weights and sizes and using various finishing options, simulating a wide variety of real-world job scenarios. BLI technicians evaluate image quality, including production of halftones, text and fine lines, plus density levels and variations in density, providing buyers with invaluable advice on best practices pre-flight and in-flight for achieving optimum output and productivity.

BLI also assesses media-handling capabilities in terms of the paper sizes, weights and capacities supported; media catalogue integration; and inline finishing support. In addition, the test includes an assessment of ease of use for setting up, submitting and managing jobs; loading paper and toner; switching out operator-replaceable consumables; and removing misfeeds.

BLI technicians have produced more than 22 million impressions, both in the lab and in the field, in the years since the firm began testing production devices and have learned what separates the best from the rest of the pack. It is the best in each category that BLI recognises with its inaugural PRO Awards.

We are extremely pleased to have won both BLI PRO Awards and with the acknowledgment these powerful black & white systems, co-developed by Canon and Océ, are receiving. The latest awards follow hot on the heels of the prestigious iF Product Design Award that the Océ VarioPrint DP Line won. These awards underline the commitment of the compelling combination of Canon and Océ to continuously improve their products so that they meet a range of requirements spearheaded by the customers business needs, said Dave Clark, managing director at Océ South Africa.

Winner of the PRO Award for Outstanding Monochrome Light- to Mid-Volume Production Device, the Océ VarioPrint 135 gave a stellar performance in its intensive three-day test period during which 87841 impressions were printed.

The Océ VarioPrint 135 produced the best image quality in default settings of models tested to date, including smooth halftones and crisp text and fine lines, said Sweetnam, commenting on the units selection as a PRO Award winner. In fact, added Sweetnam, in the two years since BLI began its field testing of production units, the VarioPrint 135 is the first device to receive the rarely-awarded five-star rating for image quality, as well as for an unprecedented five out of six image quality sub-categories.

Equally impressive are the units paper-handling capabilities, with WYSIWYG loading for all trays and a seamlessly integrated media catalogue, that facilitates setting up custom media, switching between media, and managing changing media demands over the course of a day. The machine is also much less prone to error than competing units and offers excellent queue management capabilities, the same job scheduler screen display as on the Gemini series products, and a new WYSIWYG pre-flight job-ticket adjustment capability.

Capable of running 24-hour shifts with no downtime, thanks to its multi-stacker tray design and uninterrupted paper and toner refill, the fully configured Océ VarioPrint 135 can run unattended for nearly three hours, producing 23,600 double-sided A4 impressions (two-up on A3) before requiring attention, which is significantly more than most competitors.

The VarioPrint 135 delivers users a level of production efficiency, workflow intelligence and consistent quality output that is unmatched in the production printing marketplace today, said Clark. We are pleased to be recognised by BLI for our dedication to successfully deliver the next generation of monochrome digital presses without sacrificing performance and reliability.

Winner of BLIs PRO Award for Outstanding Monochrome High-Volume Production Device, the Océ VarioPrint 6320 Ultra, which produced 163802 impressions in its evaluation, is the latest in the series of production devices using Océs patented Gemini instant duplex printing technology, which involves imaging both sides of the paper at the same time using dual-imaging organic photoconductor belt and fuser modules. With advertised maximum throughput speeds of 157 impressions per minute in simplex mode and 314 impressions per minute in duplex mode, its also the fastest in the family.

With its single-pass duplex system, the Océ VarioPrint 6320 Ultra not only achieves super-fast duplex speeds, but also has the simplest paper path of models in the marketplace, noted Sweetnam. Unlike with rival devices, there is no need for reverse direction clutches, flipping of sheets or reverse collation of tabs or inserts, all of which help minimise the impact of media size, weight and type on image registration and reliability and reduce the occurrence of operator errors. The benefit of this simple paper path was demonstrated during BLIs extensive 10-million-page test of the 250-ipm VarioPrint 6250, the 6320s sister product, in which the unit proved to be highly reliable and not a single job from the wide array of complex production-class jobs was produced incorrectly.

Ease of use and operator productivity are also key strengths of the Océ platform. With WYSIWYG media handling throughout, an excellent device control panel providing efficient job and queue management capabilities, and a unique scheduler function that allows operators to anticipate any need for intervention from across the print shop long before it will be required, helping to reduce device downtime, said Sweetnam.

The units very good output quality has a pleasing matte finish similar to that produced by offset/ litho presses. Whats more, the Screenpoint tuning capability in the print driver adds a selection of custom brightness and contrast settings that give the operator more control over output appearance than with the previously tested VarioPrint 6250.

We are extremely proud that the Océ VarioPrint 6320 Ultra has received the coveted BLI PRO Award, said Clark. Rather than simply putting two print engines together, Océ developed a real perfecting press. Both customer feedback and the BLI tests prove that this was the right decision, with high marks for the image registration accuracy, media flexibility, intrinsic printer reliability and low energy use of the system.