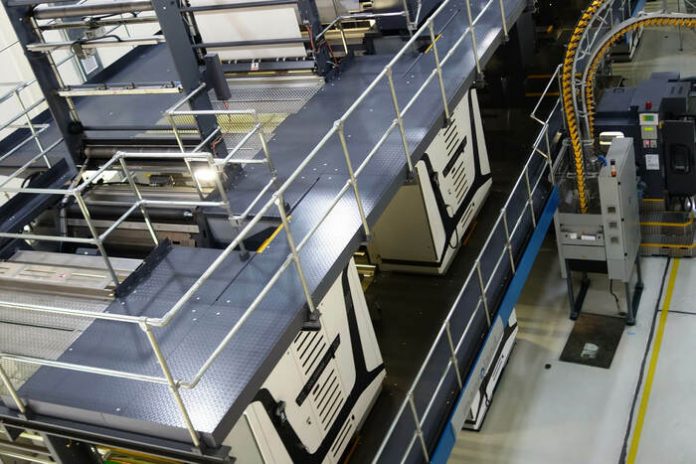 Manroland Goss announced that new press lines are scheduled to be installed and commissioned by mid-2022. After commissioning, the COLORMAN e:line will produce the daily circulation of the newspaper Le Télégramme with more than 180,000 copies and 19 local editions.

The media group Le Télégramme, based in France, has decided in favour of the future-oriented technology of the COLORMAN e:line with its comprehensive automation equipment ‘autoprint’ and placed an order with manroland Goss for two 64-page tabloid presses.

Le Télégramme relies on the technology and know-how of the Augsburg printing experts for its new installation. State-of-the-art PECOM operation technology with SlidePad operation and flexible MobilPad application equips the French media group for future demands. Both companies are building on a long-term service partnership.

The ground-breaking inline control systems have been successively developed together with manroland Goss’ own subsidiary grapho metronic Mess und Regeltechnik GmbH in Munich since the early 2000s, initially for the world’s most successful manroland commercial press series LITHOMAN and ROTOMAN. Over the past 10 years, these inline control solutions have gradually become established in the newspaper press sector as well.

The customer will benefit from the highest control accuracy of the various regulation and control systems. Furthermore, the networking of the individual components through data management in the PECOM-X control and console system provides the prerequisite for fully automatic operation of the presses – manroland Goss’ autoprint technolgy. Equipped with such a high degree of automation, the lowest possible waste values can be achieved during production start-up and production run.

Édouard Coudurier (Président Directeur Général Le Télégramme) said, ‘The manroland Goss COLORMAN e:line press, thanks to its printing speed and developed automation, enables Le Télégramme to continue to offer its readers a high-circulation, multi-issue newspaper under optimal conditions in terms of quality, time and profitability. Le Télégramme is therefore pursuing a dual strategy based on dense local coverage in print and on the internet, combined with an accelerated development of new digital services (video, podcasts, thematic newsletters, etc.)

‘In today’s complex and demanding newspaper environment, which is certainly struggling, it shows that it can be possible for newspaper publishers to achieve a corresponding pay-back by investing in state-of-the-art newspaper press technology. We are pretty much delighted having been selected by Le Télégramme for this interesting project,’ said Dietmar Dotterweich, Deputy Vice President Sales of manroland Goss web systems GmbH.

Be Inspired By Printing Solutions At The Africa Print Bloemfontein Expo

Be Inspired By Printing Solutions At The Africa Print Nelspruit Expo