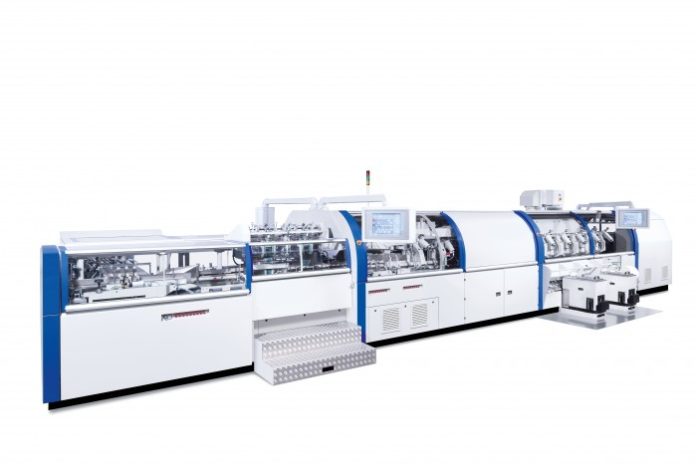 Kolbus Book Manufacturing division will present 3D Format Variation books on a running machine without stopping for make-ready. The key elements of this presentation are the KM 200 Zero-Make-Ready Perfect Binder with newly enhanced 3D Format Variation capabilities and the brand-new HD-HD 143 Three-Knife-Trimmer.

This new zero-make-ready trimmer can trim books of different thicknesses, different heights and different widths without stopping for format adjustment. This will be one of the technology highlights at drupa 2016 (31 May – 10 June, Düsseldorf). This is all industrial scale equipment, capable of producing thousands of books per hour just as easily as runs of one book.

For feeding printed signatures into the system, KOLBUS will demonstrate the full versatility of its approach. For digital web-fed printing, the bookbinding system will be fed by the WF 100 Webfolder. With a capacity of up to 1.5 million pages per hour in its current, standard version, the KOLBUS Webfolder has the potential to start working today and outlast several generations of digital presses.

The WF 100 imposes no limitations on subsequent finishing operations. Perfect binding, sewing, stitching, perforating, gluing are all possible. For the link into the bindery, KOLBUS has a wide array of possibilities. Fully-automatic, intermediate storage, inline coupling, variable speed links are all possible. KOLBUS can also create systems for fully-automatic handling of inserts just-in-time and just-in-sequence.

Alternatively, the KM 200 is also equipped for feeding of book-blocks or even stacks of loose-sheets. Furthermore, the KM 200 can easily be switched from paperback to hardcover book blocks.

At drupa 2016, KOLBUS will demonstrate this capability and, at the same time, introduce the brand-new Hardcover Book-line BF 513. This machine will make all the zero-make-ready features of the flagship BF 530 Bookjet®-Edition available for the lower budget, 30 books a minute class.

KOLBUS’ Commercial and Publishing Printing division will present the brand-new KM 610 Perfect Binder. This new line of machines, running upwards from 5000 books per hour, will be displayed in its 7000 book per hour version. The new KM 610 series has been newly designed to incorporate the user interface structure of the future, taking ease of operation to a new level.

As a special feature at drupa, Kolbus will be running the new KM 610 binder at full speed through the new digital zero-make-ready three-knife-trimmer HD-HD 143, thereby displaying the unparalleled hybrid capabilities engineered into the KOLBUS system.

This time, it will be Kolbus’ youngest division that will put the most sensational exhibit on display. For the Luxury Packaging industry, an innovative production system for rigid boxes has been developed that will revolutionise the luxury packaging industry and will even impact the luxury goods industry. At their stand at drupa 2016, they will produce rigid cardboard boxes with lids and metal fasteners on a fully automatic continuous flow line. This will be demonstrated at an unprecedented running speed of more than 2.000 boxes per hour, and format changeovers will be shown to be just as easy as on a modern KOLBUS case maker.

For the luxury packaging industry, this is the beginning of a new era. For the first time, product changes will be done by re-setting a machine, rather than retooling it.

It will again be possible to produce luxury packaging in the same, affluent economies where luxury goods are sold. Minimum order quantities will drop dramatically, opening luxury goods market to small, artisanal manufacturers. And the famous mega-brands will get the possibility to fine-tune their production to sales trends on a weekly rather than an annual basis. At the same time, the product quality that can be achieved is far superior to today’s market standards.

In addition to this, there will be a lot of focus on the Kolbus approach to workflow design and systems control, especially in view of the approaching era of Industrie 4.0. On the occasion of the pre-drupa 2016 International Media Conference, KOLBUS has put its XML syntax, in other words, the language that Kolbus machines speak, on the internet for free down-load for everyone.

At Kolbus, after observing the approach to work flow design over the past 15 years it was finally considered deeply flawed in that many suppliers try to sell proprietary systems. A proprietary system is directly opposed to the needs of the modern, networked economy, were processes and resources need to be freely linked. Therefore, KOLBUS found it was time to deliver a powerful signal by giving networking software away for free.

With this simple system, it will be easy for customers to design workflow systems within which they and their ultimate customers can communicate directly with the Kolbus production systems fulfilling the orders, wherever and whenever necessary.

Kolbus hopes that this example may be followed so that the way can be opened to a future, perfectly networked industry including the printing services that it will need.

FESPA Confirms Dates Of All Global Events In 2023