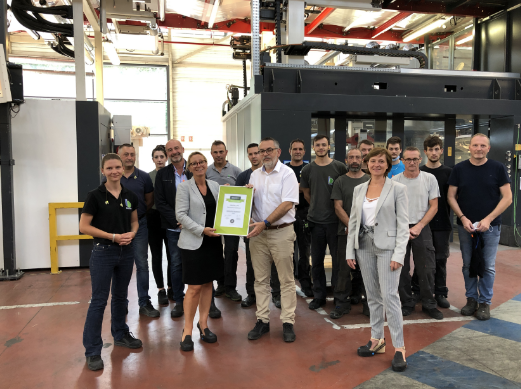 Printing more than 350 million square metres of film each year, Sainte-Sigolène-based Groupe Barbier sources its flexo plates from Médialliance, which in 2020 became the first business in the world to achieve ‘best in class’ plate making certification under the new XPS Crystal Certification Programme from Esko.

‘Using flexo plates from a certified supplier like Médialliance gives us the assurance that we are consistently employing superior plates in our packaging production, ensuring a superior print quality for our customers,’ said Amandine Le Guilloux, Head of Printing for Groupe Barbier. ‘We can be confident that the plates have been through rigorous quality control, produced using equipment and processes that have been verified against the Esko ‘XPS Certified Plate Reference’. This means that we are assured – and in turn can assure our own customers – of the optimum quality and performance of both the plates and the resulting print.’

Established in 1955, Groupe Barbier remains a family business, with a culture entirely focused on safety, quality, service, performance, investment and innovation. The company takes pride in a reputation based on its experience, its know-how and its 100% French-origin production.

‘Groupe Barbier is particularly sensitive to environmental issues, which have become a major strategic axis of development across the industry,’ said Amandine. ‘With everything from eco-design and biomaterials through to post-consumer recovery channels for the recycling of agricultural, industrial and household film, including multi-layer substrates, sustainability is a key consideration for all modern businesses, including our own.

‘As a certified Esko partner, Médialliance supplies us with plates that deliver improved consistency and quality of final print. This removes a significant amount of waste from our print production process, in terms of both errors and re-runs, and contributes to our sustainability efforts.’

The award-winning Esko XPS Crystal technology optimally combines UV main and back exposure, using LEDs that always emit consistent UV light as opposed to traditional exposure frames, which use lightbulbs with fluctuating output. ‘Because the system uses LED technology to expose plates instead of fluorescent lamps that contain mercury and are dangerous for the environment, the Esko XPS Crystal LED technology also contributes to a cleaner process upstream, reducing energy use and waste in platemaking while delivering optimal results for our customers.’

The XPS Crystal Certification Programme was developed specifically by Esko to ensure the entire supply chain can meet the exacting needs and requirements of brands and converters in terms of predictable and accurate plate quality and the highest plate making consistency available, for any given photopolymer.

‘We are delighted that Groupe Barbier is so impressed with the plates produced by Médialliance, the first of our global customers to have achieved this accreditation,’ said Eddy Fadel, Vice President EMEA at Esko. ‘The programme was specifically developed to recognize those prepress platemaking businesses that consistently produce superior flexo plates. For such a prestigious manufacturer as Groupe Barbier to recognise the benefits of using a certified platemaker in both the quality of the final product and the sustainability benefits is testament to the value of the certification scheme.’