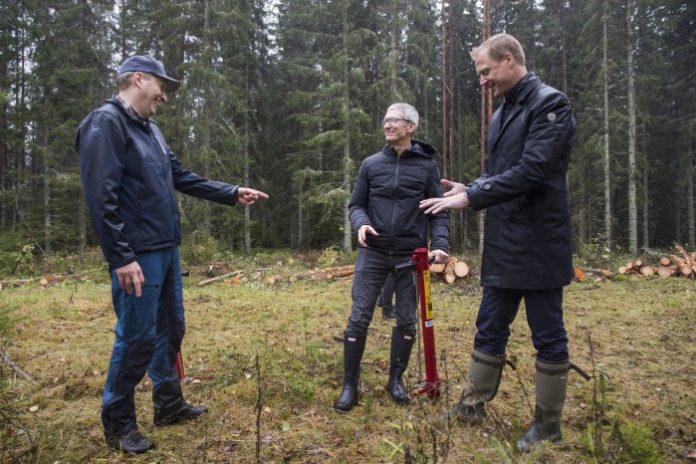 When Apple CEO Tim Cook wanted to discover more about the sustainability work that lies behind the paperboard material Invercote, he visited the forest outside Iggesund in Sweden. The manufacturer, Iggesund Paperboard, is part of the Holmen forest industry group and is at the forefront of sustainability. Present to discuss with Tim Cook were Holmen’s CEO Henrik Sjölund and Iggesund Paperboard’s CEO Daniel Peltonen.

Holmen has repeatedly ranked among the world’s most sustainable companies, with its sustainably managed forest as a cornerstone of that achievement. “A visit to the breathtaking forests of northern Sweden with @IggesundAB, our partners in innovation and sustainable packaging,” tweeted Cook after his visit to Iggesund. The Apple CEO also planted his own tree in Iggesund’s forests as he followed the whole process from forest management to finished packaging.

“For Holmen it is self-evident to start with sustainable forestry. We grow trees with an 80 to 90-year time frame, with the timber being used to build houses. We make the paperboard from pulpwood from the forest and chips from the sawmill. Iggesund is a good example of a climate-smart combine where we feed in forest raw materials and produce bioenergy, paper pulp and paperboard. Major investments over a long time plus a system in balance are a prerequisite for a sustainable value chain. The Iggesund combine binds 0.7 million tonnes of CO2.” So stated Holmen’s CEO Henrik Sjölund on the occasion of the visit by the company with the world’s biggest market capitalisation.

Invercote, the material in packaging for Apple among others, comes from Iggesund Mill and well-managed forests.

“We have been harvesting and maintaining Swedish forests in a traditional and sustainable way for the past 400 years. Everything starts with long-term sustainable forestry. For us it is natural to work in a climate-compensating way and based on a value chain where all stages are important,” concluded Holmen’s CEO Henrik Sjölund.

There is a very special history behind why Iggesund is a supplier to Apple. It was the company’s legendary founder and former CEO Steve Jobs who decided that Iggesund would supply the material for Apple’s packaging. Employees travelled around the world and collected possible materials. When the samples were later presented at the headquarters in Cupertino, Jobs pointed to Invercote from Iggesund and said: “This is the one we want.”

Iggesund Paperboard is part of the Swedish forest industry group Holmen, one of the world’s 100 most sustainable companies listed on the United Nations Global Compact Index. Iggesund’s turnover is just over €500 million and its flagship product Invercote is sold in more than 100 countries. The company has two brand families, Invercote and Incada, both positioned at the high end of their respective segments. Since 2010 Iggesund has invested more than €380 million to increase its energy efficiency and reduce the fossil emissions from its production.

Iggesund and the Holmen Group report all their fossil carbon emissions to the Carbon Disclosure Project. The environmental data form an integral part of an annual report that complies with the Global Reporting Initiative’s highest level of sustainability reporting. Iggesund was founded as an iron mill in 1685, but has been making paperboard for more than 50 years. The two mills, in northern Sweden and northern England employ 1500 people.