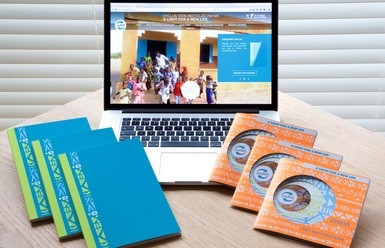 Antalis and partner Arjowiggins Graphic have provided 200 solar panels to assist villages in Mali, namely supporting education for children as part of their cooperation with the ChildFund Alliance.

Solar lamps will be distributed to children living in villages without electricity as part of ChildFund’s global Light to Learn challenge. The lamps, which are being sent out by the ChildFund Alliance, can provide up to 16 hours of intense light and 100 hours of soft light when completely charged.

Arjowiggins and ChildFund kicked off the campaign in May as part of their annual Cyclus campaign. They, along with Antalis, called on the print community to watch a video about Light to Learn and donated one solar lamp for every 25 views, easily hitting the target of 200 as views skyrocketed to 6050.

Last year, a similar Cyclus campaign donated 100 used bicycles to remote and isolated villages in India. Arjowiggins operational marketing manager Angela De Vorchik said, ‘Cyclus is rich in environmental and ethical principles and so joining forces with ChildFund Alliance is a natural fit for the brand.

‘This year we have implemented a purposefully engaging campaign approach to encourage customers to view the videos and learn how something as simple as a solar lamp can revolutionise a child’s life.’

‘We’re very lucky living where we are because we turn a switch and the light comes on but you don’t need to stray too far away from the urban area and suddenly mobile phone signal is a bit patchy,’ said Botfield.

‘To be able to support children to do their homework when the sun has gone down by giving them a light that isn’t going to gobble up AA batteries, I think that’s a terrific thing.’ Botfield highlighted a number of other charitable causes that Antalis has contributed towards, including staff competing in a cross trainer challenge to take enough steps to simulate climbing Mount Everest.